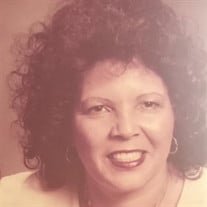 IDA LOUISE BROWN May 31, 1934 - May 13, 2021 “It was all in God’s Plan” Ida’s life started from humble beginnings in 1934 in Chestnut, Alabama. She was the oldest of ten children born to Ms. Slyvia Montgomery and is survived by two siblings, Mr. Sam Montgomery of Hollis, New York and Ms. Angela Montgomery of Chestnut. Ms. Brown attributed her strong upbringing to her grandmother Momma Dorsey. During the summer of June 1954 she and a friend traveled to Biloxi, Mississippi to search for jobs. This venture proved to be successful since she found the love of her life, Air Force Sgt. Lewis Brown, and a job. Lewis was stationed at Keesler Air Force Base (KAFB) after attending Basic Training at Lackland AFB, Texas. He had also completed his freshman year of college at Florida A&M University in Tallahassee, Florida prior to his assignment to KAFB. Ida’s next chapter in God’s plan led her to a diverse change in lifestyle far from Chestnut. Throughout their military travels they were stationed at numerous overseas and stateside bases such as the 7505th USAF Hospital, (located near Swindon, England) and RAF Station Bentwaters, (located near Ipswich, England); and the Azores, Portugal. After returning from overseas they were stationed at Stead AFB, Nevada; Ent AFB, Colorado; Webb AFB, Texas; and their final destination of California at Travis AFB and Norton AFB. When NAFB closed in 1994 Ida worked for the Harris’ Company in San Bernardino and Gottschalks in Redlands. Ms. Brown worked a total of 35 years as a military spouse and a civilian, eventually retiring after Gottschalks closed. Ida is survived by Lewis, her husband of 66 years and two daughters Sandra Brown of Highland, California and Sharon Johnson (husband Bud) of Yuma, Arizona. She also has two grandchildren, Elizabeth Jackson (husband Jimmie) of Madison, Alabama and Edward Lawrence of Highland, and a great granddaughter Domunique Ramirez of Madison. One of Ida’s goals was to see her granddaughter and grandson graduate from college, which she did. In looking over Ida’s life, she “Did It All” in God’s Plan. In a moment of sentimental thought, there is a special message signed in her high school autograph book from Sgt. Brown. It reads: “You are the sweetest person I have ever met, and hopefully the sweetest person I will ever meet. I wish you much success in the future.” *Note: On August 24, 2021 Ida and Lewis would have been married a total of 67 years. In closing: Ida established many long-term friendships that she cherished. Some include: Ms. Lizzie Hollingsworth of Birmingham, AL who she grew up with in elementary school. Ms. Margaretta Alvarez (Tony) of Greece, who she worked with for many years at Norton AFB Base Exchange (BX). Ms. Mae Holland of San Bernardino, who she fondly adored. We all love you Idie

The family of Ida Louise Brown created this Life Tributes page to make it easy to share your memories.

Send flowers to the Brown family.