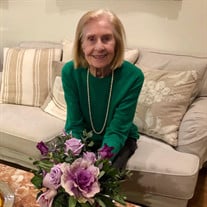 Hildegard Helene Lotter Longmire Obituary Hildegard Helene Lotter Longmire went to her eternal rest on October 29, 2019, surrounded by her loving family in Sherman Oaks, California. She was the only child of Ludwig Karl Lotter and Sophie Wiemer Lotter. Hildegard was born on January 15, 1929, in the provincial city of Darmstadt, then the seat of the Princes of Hessen-Darmstadt. The city was surrounded by gentle hills, forests, and flowering meadows. She had a happy childhood with good playmates and cousins. Hildegard remembers the strength for the positive from her mother and the love of creation, nature, music, and poetry from her father. Hildegard’s formal education was interrupted by WWII and life was never the same again in Germany. Out of the ashes came new hope when Hildegard was introduced to a handsome young Air Force Captain, Robert A. Longmire, whom she married in 1953. They arrived in New York harbor aboard the SS United States liner in February that year. Soon she was graciously received by her new family in Utica, Mississippi. They were blessed with two sweet and healthy daughters. Hildegard’s life was enriched by living in numerous locations in the United States and abroad. Her husband retired as an Air Force Lt. Colonel from Norton Air Force Base in 1972, and thereafter they decided to make their home in San Bernardino, California. They joined the Lutheran Church of Our Savior, a church they loved. Hildegard was active in the church and often visited the shut-ins at local nursing homes. She also worked with her friend Karen Blake on the Altar Guild. Hildegard is survived by her daughters, Viktoria Vidali and Stephanie Longmire Lazic, grandchildren Alexandra Sophie Lazic, Lorenzo and Orlando Vidali, nephews, nieces, and many friends. A graveside service will be held at Riverside National Cemetery on November 18, 2019, at 9:30 AM. In lieu of flowers, memorial gifts may be made to the Lutheran Church of Our Savior, 5050 N. Sierra Way, San Bernardino, California 92404.

The family of Hildegard Helene Lotter Longmire created this Life Tributes page to make it easy to share your memories.

Send flowers to the Longmire family.