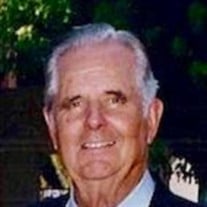 Farmer • Minister • Probation Officer • Therapist • Volunteer Rev. Harry Roy Ulmer, 95, died peacefully at his home at Brightwater Senior Living in Highland, CA on May 21, 2020 after a brief, non-COVID illness. Harry was born April 7, 1925 in Greenville, IL to Courtney and Ethel Ulmer. Like his father and grandfather, he began life as a farmer. He served his country in the army during the Korean War. After his military service, Harry had a calling to the church and moved from farming to serving God. He graduated from Southern Illinois University and received a Master of Divinity degree from Wesley Theological Seminary in Washington D.C. While a student, Harry was assigned to four Methodist churches in Illinois and Maryland. During a blizzard in December of 1962, he moved his young family from Maryland to San Diego, California. He was an associate minister at Pacific Beach United Methodist Church until 1966, when he again changed careers. Harry joined the San Bernardino County Probation Department, where he worked with both adults and juveniles until retirement in 1983. During this time, he also became a therapist and member of the California Association of Marriage & Family Therapists (CAMFT), using an RV as a mobile office. There was no slowing down after retirement, as Harry worked tirelessly as a volunteer for St. Bernardine’s Hospice, RVers in Mission, and Heifer International. He was also devoted to Del Rosa United Methodist Church, where he was an active member, and sometime interim pastor, for over 50 years. Harry also served as chaplain for various San Bernardino and Redlands organizations, married hundreds of couples and presided over the funerals of many others. Harry was “green” before the word “ecology” became popular. He recycled everything, rode his bike and Moped to work, was an early adaptor of solar energy, and composted household waste. With the mulch from the compost pit, he grew prolific gardens, sharing fruits, flowers and vegetables from his abundance. Always the adventurer, Harry crisscrossed the continent many times over visiting Alaska, Canada, and Mexico via RV, cruising the Caribbean and flying to Hawaii and Europe. Harry was preceded in death by his beloved wife of 63 years, Delores and his older brother, Robert Ulmer. He is survived by his children, Bethany Ulmer (David Bancroft) of San Bernardino, Mark Ulmer (Emily) of Yorba Linda and Lisa Ulmer of Long Beach. Also surviving him are his four grandchildren, Devin Parrish (David), Matthew Ulmer (Kara), Devin Ulmer and Drake Ulmer, as well as five great-grandchildren. A public visitation will be held at Bobbitt Memorial Chapel, 1299 E. Highland Ave. San Bernardino on Thursday, June 25, 2020 from 5:00 – 7:00 p.m. A Committal service will take place on Friday, June 26, 2020 at 11:00 a.m. at Riverside National Cemetery, 22495 Van Buren Blvd, Riverside. In lieu of flowers, please make a donation in Harry’s memory to heifer.org. To leave a condolence on his memorial page, please visit www.bobbittchapel.com

The family of Harry Roy Ulmer created this Life Tributes page to make it easy to share your memories.

Send flowers to the Ulmer family.