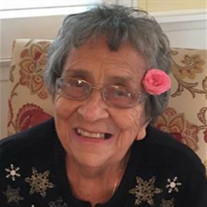 Gloria Rose Ludvigsen, a former resident of Lake Havasu City, died on October 14, 2017, in San Bernardino, California. Gloria was born in Chicago, Illinois, on October 23, 1927, to Angelo and Maria Grande, immigrants from Italy. In 1951, Gloria married Paul August Ludvigsen. Together they had four children and lived throughout the United States, including in Illinois, Ohio, Indiana, Michigan, Florida, California and Arizona. Gloria worked as a telephone operator for AT & T, a high school occupational instructor and a small business owner. Gloria had great enthusiasm for life and was active and engaged until her death. While living in Lake Havasu, she was an active member and Eucharistic minister at Our Lady of the Lake Church and a volunteer for the St. Vincent de Paul Society. She also was a member of the Catholic Daughters of America. At the time of her death she was taking classes in the painting of religious icons and looking forward to a cruise with her children, grandchildren, nieces and nephews, to celebrate her 90th birthday. Gloria is survived by her children, Cynthia Ludvigsen (Gary Silvius), San Bernardino, CA; her son Calvin Ludvigsen (Kathleen), Desert Hot Springs, CA; her daughter Judy Saso (James), Upland, CA; her grandchildren, Lindsay and Kaylan Ludvigsen, Laura, Stephen and Elizabeth Silvius, Joseph and Jarrett Saso, Amanda Ludvigsen, and her foster grandson Brandon Mulcahy, and many loving nieces and nephews. She was predeceased by her husband Paul, who died in 2007, her son Paul A. Ludvigsen II, her parents, Angelo and Maria Grande, and her siblings, Carmella Grimaldi, Virginia Geanto, Clara Jablonski and Angelo Grande, Jr. Visitation and rosary were celebrated on October 21, 2017, at Our Lady of the Assumption Church San Bernardino, California. Interment is scheduled for Saturday, November 18, 2017, at 10 a.m. at Lake Havasu Memorial Gardens. In lieu of flowers, the family suggests donations to the St. Vincent de Paul Society of Lake Havasu City, 1851 Commander Dr., Lake Havasu City, AZ 86403.

The family of Gloria Rose Ludvigsen created this Life Tributes page to make it easy to share your memories.

Send flowers to the Ludvigsen family.