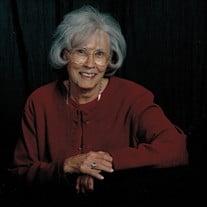 Watson, Glenna Jean Pattee March 24, 1924 – June 16, 2017 Jean Watson met her Savior face to Face on June 16, 2017, at the age of 93. She was born in Ravenna, Ohio, one of five children to Glen and Cornell Pattee, on March 24, 1924. Having lived the majority of her life in Richmond, VA, she moved to Redlands, CA, 16 years ago to live near her grandchildren. She leaves behind dear friends across the country. She is survived by her children Thomas L. Watson, Jr. of Farmville, VA; Kathleen Robinson of Richmond, VA; Beth (Bob) Larivee, grandsons David and Andrew Larivee, of Redlands, CA. She was preceded in death by her daughter, Barbara Watson. A memorial service will be held at Trinity Church, 1551 Reservoir Road, Redlands, CA, 92374, on Saturday, July 1, at 11:00 a.m. Interment will be private. Donations may be made to Trinity Church missions’ fund.

The family of Glenna "Jean" Pattee Watson created this Life Tributes page to make it easy to share your memories.

Send flowers to the Watson family.