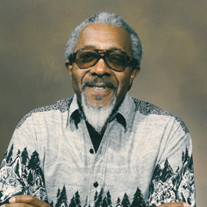 Gerald L Warmack, 81, of Redlands CA, died Wednesday afternoon, May 17, 2017, at Redlands Community Hospital. He was born September 16, 1935, in Jamestown, New York, the son of late Henry Eugene and Elizabeth Louise Warmack. He was preceded in death by his parents: his brother Raymond Warmack; his wife Josephine Davis Warmack; two sons Jesse Davis and Anthony Warmack; two daughters Delphine Davis and Virginia Thomas. Remaining to cherish his memories are his wife, Faye Warmack; two sons Vincent Warmack and James Laeger; five daughters Betty Warmack, Geraldine Washington, Ruth Yoshida (James Yoshida), Julie Wilson (Thomas Wilson) Jody Harris (Donald Hartis); four sister-in-laws, Lorene Warmack, Velma Young, Mary Davis and Dorothy Davis; one son- in -law Kim Thomas. 30 grandchildren and many great-grandchildren and a few great-great-grandchildren a host of nieces and nephews (two very special nieces Jeanne Montrese and Nedra Downs (Albert Downs). Gerald served in the United States Air Force 1956 to 1959 as a jet engine mechanic. He was offered an increase in rank and the position of instructor, to train other service members his skills, which he politely declined. He was transferred to Norton Air Force base in San Bernardino, CA, where he met and married Miss Josephine Davis. Prior to his retirement in April 1993, Gerald worked as an automobile mechanic, in construction and plumbing before attaining the position of warehousemen for the Federal Government, which gave him the security he desired to provide excellent care for his family. He gave more than 34 years of his life to serving the United States. In 1974, Gerald and Faye became good friends and later married. On May 2, 2017, they celebrated 43 years of love and Devotion to each other. Gerald had a lifelong interest in motorcycles, hunting, and aeronautics. As a teenager, he piloted his uncle's airplane, which resulted in his joining the airforce. (Aren't we glad he did.) Gerald was involved in the Civil Rights Movement and served as a bodyguard to the Corps chairman. Other interest in his life included playing football on his high school team, boxing while in the Air Force, and was awarded the 2nd-degree black belt at the Tang Soo do Academy, where he was an instructor. While doing all of these things and raising his family, Gerald attended evening classes at San Bernardino Valley College attaining an AA degree. Gerald will be remembered as a loving caring responsible man of the highest integrity.

The family of Mr Gerald Lavern Warmack created this Life Tributes page to make it easy to share your memories.

Send flowers to the Warmack family.