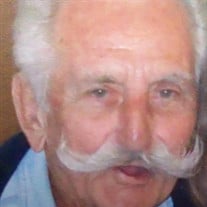 George W. Gastel was a Renaissance man in every sense of the word. Father, husband, son, businessman, metal worker, miner, student and chemist; George was all of those things and a self-made man. He passed away Oct. 17, 2015 at his home with his family by his side. He leaves behind his wife of 61 years, Margaret; sons William, Michael and Robert; eight grandchildren and eight great-grandchildren. George W. Gastel was born in Peiting, Germany on December 17, 1931, the youngest of five children. George’s natural curiosity would lead him away from the family business early in life He knew he did not want to be a butcher like his father, He wanted something else. As it happened, his family lived across the street from a neighbor who was a metal worker so George's father worked out a barter deal with the man to teach George as an apprentice in exchange for free meat. George's informal education in metal working would serve him well later. He founded Arrowhead Sheet Metal in 1969, naming his business after the famous Arrowhead landmark visible on the San Bernardino Mountains that framed the city. The San Bernardino-based company would later expand into the heating and cooling, both commercial and residential. George brought his wife and sons into the thriving business as partners. Eventually, several extended family members would find lifelong careers at Arrowhead Mechanical. George left Germany for the United States in 1952. His residency depended on his being able to work in order to maintain a sponsored green card. He joined the Army; however, his Army career was short-lived as he was not allowed to remain enlisted because he was not yet an American citizen. He would later join the United States Air Force, which allowed him to remain enlisted even though he was not yet a naturalized citizen. He was stationed at George AFB and would ride the bus to San Diego as many GI’s would. It was on one do those fated bus rides that he would meet his wife, Margaret. He was so flustered when he first saw her that he could not say a word; however, he arranged to sit next to her on the way back so that they could talk. Within two years, the couple was married. He would become an American citizen later that year, an accomplishment he was deeply proud of. The couple had three sons: William, Michael and Robert. George was close to his boys, heading Boy Scout troops and taking them off-road racing. A self-taught miner and amateur chemist, he had no formal education until later on in life yet founded a thriving sheet metal business and taught himself English when he immigrated to America. Some of George's favorite past times were metal crafting and mining for gold and other precious metals. "When I was taking chemistry in high school, my dad read my textbook and taught himself the basics of chemistry," Robert Gastel said. That was how he learned to coax the precious metals out of the rock and mineral he mined, his son said. He would later accentuate his lifelong learning with an associate's degree from San Bernardino Valley College and later, a certificate in Construction Management from Cal Poly Pomona, becoming one of the first to graduate under the university's new certification program. When he wasn't working, George indulged his love of cooking, gardening, metal crafting and travel, often taking trips to Mexico with his sons. An aficionado of German beer and cuisine, he was equally enthralled with Mexican food and enjoyed dinners out at local Mexican restaurants. Well-known for his mischievous smile, twinkling eyes and handlebar mustache, George's sense of humor remained with him for life, often teasing his grandchildren and joking frequently. "He'd say 'Grab your passport, we're going to Mexico!' “Robert said, and he would mean going to one of his favorite restaurant, The Mexico Cafe, for dinner.

George W. Gastel was a Renaissance man in every sense of the word. Father, husband, son, businessman, metal worker, miner, student and chemist; George was all of those things and a self-made man. He passed away Oct. 17, 2015 at his home with... View Obituary & Service Information

The family of Mr George William Gastel created this Life Tributes page to make it easy to share your memories.

George W. Gastel was a Renaissance man in every sense of the...

Send flowers to the Gastel family.