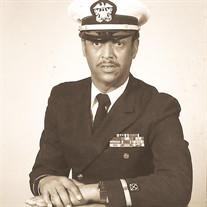 “We wish you fair winds and following seas” George Louis began his life’s odyssey in Philadelphia, PA on February 8, 1936, as the youngest child of James Gadsden Sr. and Isabel Deas. He joined one sister, Marie, and two brothers, James Jr. and Julius. As a child he was baptized and a member of White Rock Baptist Church, Philadelphia, PA. He attended Martha Washington Elementary and Edward Bok Vocational High School where he majored in Tailoring and developed his flair for style, which included putting a razor sharp crease in his pants without any starch. In 1953, at age 17, he persuaded his sister, Marie, to sign his enlistment papers and began his military career by enlisting in the United States Air Force. After a brief tour in Germany he returned home to Philadelphia where he met and married his first wife, and to that union a son, George Jr. was born. George moved to Charleston, SC in 1959 and joined the US Navy. He met the love of his life, Elizabeth, and in 1961 they married. That union produced three wonderful children, Chandra, Maria, and Gary. George delighted in being a good husband, father, and provider to his family. His first love was always his family. He was married to Liz for 55 years. He and Elizabeth did not wait for retirement to travel! They traveled all over the United States, Australia, Japan, Hong Kong, the Philippines, the Caribbean, Mexico, and the Hawaiian Islands. As many of you know, George was a competitive shopper. No matter what you bought George always waited until everyone told how much they paid and he would tell a story of how he negotiated the best deal. A few unknown facts; he was a tailor, great roller-skater, played piano by ear, spoke French and Vietnamese. YES, GEORGE SPOKE VIETNAMESE! When he retired he devoted all his time to his family. He reconnected with family members and went to many of his grandchildren’s graduations and competitions. George was also very giving and compassionate. He would save cans and bottles for recycling and give the money to a person at the recycling center who he thought needed the money the most. He even bought shoes and socks for a homeless Veteran he saw sitting on the side of the road with no shoes. If there was a child in need at Granite Hill Elementary, where his daughter Maria has taught for 15 years, George was the first person to give what was needed. George’s second love was the United States Navy. Due to the US Navy’s mandatory retirement policy, he retired after a 30-year career. In 1987 he petitioned the Department of the Navy because he felt he had more to offer. He was recalled to active duty in 1988 to the USS Independence for an additional 5 years. He began his Navy career at Naval Base Charleston SC as a Seaman E-3. He advanced quickly in the enlisted ranks, reaching his highest enlisted rank of Chief Petty Officer E-7. George simultaneously applied for the Limited Duty Officer and Chief Warrant Officer Program and within 30 days was selected for Chief Warrant Officer. He made several contributions to the United States Navy at various commands; Beach Master Unit One; Beach Party Team Charlie Commander, Naval Amphibious Base Coronado, CA, USS La Salle; Ships Boatswain Mate, The Arabian Coast. Naval Amphibious Base Coronado; Security Officer, Beach Master Unit One; Beach Party Team Charlie; Officer In Charge, Coastal River Division 11, Mare Island Naval Ship Yard Vallejo, CA; Leading Petty Officer, USS Niagara Falls, Baltimore, MD; Leading Petty Officer, Defense Language Institute, El Paso, TX; Student, Vietnamese. Naval Inshore Operations Training Center, Mare Island Naval Ship Yard Vallejo, CA; Instructor. River Assault Squadron Eleven; Boat Captain, Vietnam. New Port, RI, USS Grand Canyon, Mayport Naval Air Station, Florida; Petty Officer In Charge Second Division. George had a long and illustrious military career and in his 35 years of naval service he had many tours of duty that took him to military bases around the world. While in Vietnam he earned a Purple Heart and many other medals and commendations. All total, the Bos’n completed 40 years of combined military service. In early retirement, he lived all his childhood dreams. He drove a bus for San Diego Transit Authority and built ships as a supervisor at Continental Maritime of San Diego. He was also very proud to be San Diego Port Authority’s oldest selectee. He leaves to mourn, but also to cherish his memory: his wife, Elizabeth, one brother, Julius Gadsden (Jean) of Philadelphia, PA; two sons, George Gadsden, Jr. of Phoenixville, PA, Gary Gadsden (Pam) of Millcreek, WA; two daughters, Chandra Hatcher of San Diego, CA, Maria Gadsden of Fontana, CA; three grandsons, Brandon Hatcher of Fort Worth, TX, Austin Gadsden of Bolivia, Abel Gadsden of Phoenixville, PA; four granddaughters Ashley Gadsden of Phoenixville, PA, Briana Hatcher of San Diego, CA, Kelly Gadsden of Fontana, CA, Lorraine Gadsden of Millcreek, WA; three great grands, Demetrius and Xavier Hatcher of Fort Worth, TX and Nala Hatcher Stevens of San Diego, CA; three nieces, Romaine Williams of Philadelphia, PA, Joanne Cole of Philadelphia, PA, Sandy Combs of Philadelphia, PA; four nephews; James Gadsden III of Philadelphia, PA, John Gadsden of Delaware, MD, David Gadsden of Philadelphia, PA, Carl Gadsden of Philadelphia, three great-grand nephews, David Williams of Philadelphia, PA, Kevin Williams of Baltimore, MD, Eric Williams of Philadelphia, PA; one brother-in-law Edward Gadson (Pat) of Fairfield, CA; three sister-in-laws; Barbara Ann Philips of Fairfield, CA, Barbara Jean Robinson of Goosecreek, SC, Dr. Mary Jane Jones (James) of Bamberg, SC. He also leaves scores of other family members, friends, and acquaintances. The Family of the late George L. Gadsden wishes to thank his friends for their prayers and support during this difficult time. We pray God will continue to bestow His blessings upon you all.

The family of CWO4 George Louis Gadsden created this Life Tributes page to make it easy to share your memories.

“We wish you fair winds and following seas”

Send flowers to the Gadsden family.