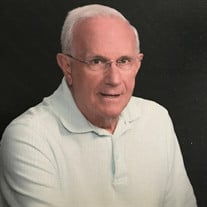 Frank Daniel Pietro July 11,1928 - January 5, 2018 Frank Daniel Pietro passed away January 5, 2018 in San Bernardino, California surrounded by his family. Frank was born July 11, 1928 in Altoona, PA to Frank and Mary Pietro. In 1952 he married the love of his life, Anita Glady, and had seven children who adored him. Frank enjoyed two exemplary careers. After retiring from the Air Force as Chief Master Sergeant in San Bernardino, CA in 1969, Frank began a career at Phototron where he retired as their Vice President. While Frank enjoyed and excelled in both careers, his true passions were cooking amazing food for others and volunteering. In retirement, he cooked for the homeless twice a week at Mary’s Table for thirteen years and continued to bring the Eucharist to the sick at St. Bernardine’s Hospital. Frank is preceded in death by his wife, Anita, and three of his children, Anna, Thomas and Julie. He leaves behind four daughters and three sons-in-law: Mary and Doc, Robert, Bernadette and Ty, Cindy and Andy and Catherine. He also leaves behind seven grandchildren and two grandsons- in law: Cassie (Barry), Kathryn (Manny), Sarah, Nick, Matthew, Emily and Emma and six great grandchildren with another on the way, Rhys, Vivienne, Blair, Kennedy, Manny Jr., Emerson, and Patrick Wallace. The Visitation will be held on Wednesday, Jan 17th from 4pm-6pm and a Rosary will be said for Frank to follow at 6pm at Bobbitt Memorial Chapel, 1299 E. Highland Ave. San Bernardino, CA 92404. The funeral mass will be on Thursday, Jan 18th at 10:30am at Our Lady of the Rosary Cathedral, 2525 N. Arrowhead, San Bernardino, CA with a committal service to follow at 1:31pm at Riverside National Cemetery, 22495 Van Buren Blvd, Riverside, CA 92518. In lieu of flowers, donations can be made to Veronica’s Home of Mercy, 1476 W 6th St, San Bernardino, CA 92411 or to Food for the Poor, FoodForThePoor.Org

The family of Frank Daniel Pietro created this Life Tributes page to make it easy to share your memories.

Send flowers to the Pietro family.