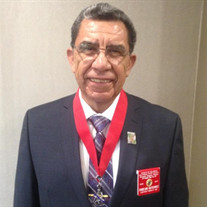 Enselmo “Sam” Gutierrez, Jr., age 73, passed away peacefully surrounded by his family on February 22, 2018. He was born on June 22, 1944 to Anselmo and Virginia A. Gutierrez. He graduated from San Bernardino High school in 1962 and subsequently enlisted in the U.S. Army where he served overseas. After his time in the Army he joined the Air Force Reserves as well as the San Bernardino City Police Reserves in 1966, which is where he met his future wife Eileen, they went on to marry in September of 1970 and had two daughters. He worked at Kaiser Steel for 13 years before pursuing his lifelong dream of becoming a firefighter with the Rialto Fire Department. He joined the Fire Department as a reserve in 1975 and went on to become a firefighter in January of 1980, throughout his tenure he was promoted to Fire Inspector, Senior Fire Inspector, Arson Investigator and Assistant Fire Marshall. He retired with 21 years of service to the Department. After his retirement he was still very active, he worked part-time for Omnitrans, transported veterans for Jerry L. Pettis Memorial VA Medical Center, drove the blood mobile for “Lifestream”, and became involved in the Knights of Columbus, Council No. 4488, where he served as Grand Knight (2012-2013) and became District Deputy for State Council District 132. Throughout his life he was also a constant blood and platelet donor, having donated over 16 gallons in his lifetime. He was also very involved in the Church and served as Lector at St. John Bosco Mission in Highland. Sam, along with his wife Eileen were able to travel to several different countries including China, France, Africa and Italy during their retirement and enjoyed traveling in their motorhome. He is survived by his wife of 47 years, Eileen, his two daughters Maria Bartolotto (Shon) and Anita Gutierrez (Raul) and one grandson Noah.

The family of Enselmo "Sam" Gutierrez created this Life Tributes page to make it easy to share your memories.

Send flowers to the Gutierrez family.