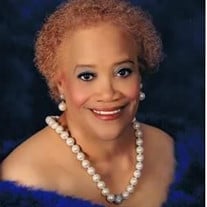 Emma Jean Malcolm, 71, Of San Bernardino, California, passed away on Saturday, January 23, 2016. She was born in Cordova, Tennessee on April 9, 1945, to the late Williemae Blackwell and Luther Blaine. She had two sister, Lee Gertha Donelson and Sandra Jones, (deceased) and two brothers Willie B. Watkins (deceased) and Roosevelt Watkins (deceased) all of Memphis Tennessee. She graduated from Douglass High in Memphis Tennessee. Emma moved to California where she worked as a social worker and later became a full-time housewife raising seven children from her first husband, the late Eddie Lawrence Frazier. Emma Jean was a beloved member of the community and could frequently be found helping people in need. Although her first name was Emma, she prefers to be called Jean. Therefore, everyone who really knew her called her Jean. Jean was a true believer in God and lived a purposed driven life, inspiring people of all ages to do their very best and to honor God in doing so. Jean believed there was no challenges in life that one could not overcome that is of course with prayer and God’s help and if you believed otherwise, then you just weren’t trying hard enough. She believe that success or failure was simply a byproduct of your determination and your prayer life. Therefore she overcame many obstacles and challenges in her life through hard work and persistence prayer. Jean wore many hats in life. She was a mother, a wife, an entrepreneur, a teacher, a public speaker, and an advocate for those who were disabled and she always spoke against injustice. Jean is survived by 7 (seven) children; Eric, Perry, Lisa, Lois, Rodney, Redge, Chris and a loving husband, Ralbert George Malcolm, of twenty years, who took care of her until the day she died. Jean is also survived by 11 (eleven) grandchildren and one great granddaughter. In addition, she is survived by her Sister Lee Gertha, Donelson and two aunts Daisy Grey and Ruth Mae Rodgers of Memphis Tennessee and host of other family members and in-laws. Interment services will be at Tradition Cemetery, 562 South I St. San Bernardino, CA. 92410 on Saturday, February 6, 2016, time to be determined. Those who would like to attend may contact Malcolm, Redge or Perry (951) 544-2424 for further information about the services.

Emma Jean Malcolm, 71, Of San Bernardino, California, passed away on Saturday, January 23, 2016. She was born in Cordova, Tennessee on April 9, 1945, to the late Williemae Blackwell and Luther Blaine. She had two sister, Lee Gertha Donelson... View Obituary & Service Information

The family of Mrs Emma Jean Malcolm created this Life Tributes page to make it easy to share your memories.

Send flowers to the Malcolm family.