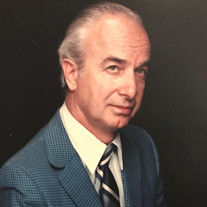 Earl Albert English 1/11/1928 - 8/10/2019 Earl Albert English, age 91, passed away peacefully in Redlands, CA on August 10, 2019. Earl, born in Bridgeport, CT, was a first generation American. His father, John English, emigrated from Greece and his mother, Emma Hesky, emigrated from Germany. Earl joined the Navy at the young age of 17 during WWII, allowing him to sail around the world, eventually settling in CA. His family also relocated to CA around that time and opened John’s BBQ in San Bernardino. Earl loved fishing, hunting, going to the horse races, reading the newspaper, and spending time with family. Earl was preceded in death by his siblings Helen, Frederick, Olga, Ed, Michael, and Louis. Earl is survived by: his brother Phil, his two daughters: Laura and Jonni, his six grandchildren: Scott, Kyle, David, Dana, Mitchell, Julia, his five great grandchildren, many nieces and nephews, and his ex-wife Norma. Earl had a great sense of humor. When asked how he was he would often answer, “Still sailing the ship.” Now he is sailing the ship in heaven. Graveside services will be held Thursday 8/22/19 at 1:00pm at Montecito Memorial Park

The family of Earl Albert English created this Life Tributes page to make it easy to share your memories.

Send flowers to the English family.