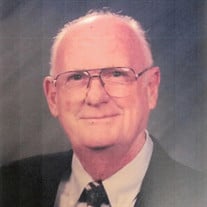 Donald Francis Troy, age 95, passed away at his home in Highland on November 20, 2021. Don was born to Harry and Katherine Troy in Los Angeles on April 23, 1926. He lived his life in the San Bernardino Valley. Donald graduated from San Bernardino High School and joined the US Navy after graduation. He served with honor during WW2. Upon discharge from his military service, he married Eudene Brooks. During their 67 years together, they raised four children. Donald graduated from SBVC and acquired his Land Surveyors license. He became a manager with California Transportation and later established the Garner and Troy Engineering and Surveying Company. He worked for many years surveying in the San Bernardino Valley and surrounding areas. Donald was very civic minded and gave back to his community. He volunteered for many organizations. He was past president of the SBHS Parents Athletic Club, supporting his children’s activities. He served as Past President of the Civil Engineering and Land Surveyors Association. He was also active with the Civitan for many years. He volunteered at the Veterans Hospital for 10 years, following his retirement. He also served as an usher for many years at Holy Rosary Catholic Church in San Bernardino and St. Adelaide’s Catholic Church in Highland. After retirement Donald created a small citrus farm in Highland, with over one hundred trees including oranges, lemons, limes and avocados. He enjoyed giving the fruit to his church, to family and many friends. He and his wife Eudene also enjoyed traveling extensively throughout the world. Donald is survived by his sister, Sheila (William) Holtsnider of Boston, his daughter, Sharon (Randy) of Reno, his son Donald (Kathy) of Highland and his son Terrance (Janna) of Highland and five grandchildren and six great grandchildren. Donald was predeceased by his parents, his brothers Tom and Jack Troy, his son Michael and his wife Eudene Troy. Don was a man of great faith. His kindness, generosity and peaceful nature will be remembered by many. A Funeral Mass will be held for him at St. Adelaide’s Catholic Church in Highland on Friday, December 17, 2021 at 10:00 am. Private interment will follow at the National Cemetery in Riverside, alongside his beloved wife Eudene.

Donald Francis Troy, age 95, passed away at his home in Highland on November 20, 2021. Don was born to Harry and Katherine Troy in Los Angeles on April 23, 1926. He lived his life in the San Bernardino Valley. Donald graduated from San Bernardino... View Obituary & Service Information

The family of Donald Francis Troy created this Life Tributes page to make it easy to share your memories.

Donald Francis Troy, age 95, passed away at his home in Highland...

Send flowers to the Troy family.