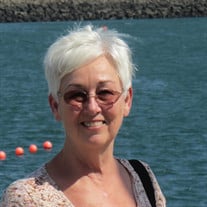 Diana Lynn Rawson passed away on May 19, 2017, at Redlands Community Hospital. She was a much beloved and devoted wife, mother and grandmother. Many of her numerous friends often fondly and respectfully referred to her as Lady Di. Diana (Ragland) was born in San Bernardino on January 19, 1947. She spent her childhood years in San Bernardino (graduating from Pacific High School in 1964), and aside from short periods in Long Beach (college) and Riverside, lived the rest of her life in Highland. In her early years, Diana nurtured - and worked very hard - to provide for her two children, Craig and Shana. She was incredibly loving and strongly motivated as a single mother during most of their upbringing. Diana was employed as an Engineering Technician of varying capacities for the County of San Bernardino (Flood Control, Waste Management and Public Works Departments). She also worked in the early 1980’s at the Riverside County Flood Control and Water Conservation District, where she met the love of her life, Michael. God blessed them with 31 wonderful years of marriage. In her teens and early adulthood, Diana developed into an accomplished musician, playing the violin and viola. She gave private lessons for the violin and also played for short periods in both the San Bernardino and Redlands Symphony Orchestras. Diana’s passion was fishing. She enjoyed fishing at many locations, however, the peace and serenity she would find in fishing on the ocean or at its shore was heavenly. Just the sound of the ocean waves could make her cry. Diana also loved to cook. In addition to cooking for Michael, she delighted in planning for special events – which usually spanned weeks in advance. Her food presentations were amazing and delicious and only surpassed by her graciousness as a hostess. Reading was a favorite pastime and social media kept her in touch with family and friends. Michael and Diana loved to travel. Along with numerous single point destinations, they went on many ocean cruises to various parts of the world, and also vacationed extensively in their motorhome. They enjoyed home improvement projects, daily excursions, playing cards with each other, talking, holding hands, and just being together. The time Diana spent with family was priceless. Her love was easy, open and giving. She adored her three granddaughters and doted on them accordingly. Her daughter Shana was her pride and joy. Diana will always be remembered for her kindness, strength and complete selflessness. Her smile was unbelievably genuine, and she made instant friends. Over her entire life, the thoughts, feelings, and concerns of others always came first. She rose above a difficult childhood to become a woman of such quality and nature, that she was loved and respected by everyone that knew her. Diana is survived by: her husband, Michael; daughter, Shana Trent (Todd); granddaughters, Courtney Glancy (Vincent), Adrianna Paulsen and Annaya Paulsen; daughter-in-law, Anna Paulsen; brother, Allen Ragland; brother, Bill Ragland (Triva); sister, Ginger Byrd (LeRoy); sister, Jan Ragland; sister, Sherry Payne (Jeff); sister, Laura Bailey (David); father-in-law David Rawson (Donna); and brother-in-law, Randy Rawson (Susie). Diana was preceded in death by: her son, Craig Paulsen; father, Nelson Ragland; mother, Margaret Grimes; step-mother, Evelyn Ragland, and mother-in-law Lois Rawson

Diana Lynn Rawson passed away on May 19, 2017, at Redlands Community Hospital. She was a much beloved and devoted wife, mother and grandmother. Many of her numerous friends often fondly and respectfully referred to her as Lady Di. Diana (Ragland)... View Obituary & Service Information

The family of Mrs Diana Lynn Rawson created this Life Tributes page to make it easy to share your memories.

Send flowers to the Rawson family.