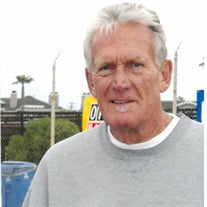 San Bernardino, CA— Dennis Michael Kordyak, 78, passed away on Friday, September 18th, at St. Bernadine Medical Center following a prolonged battle with declining health. He is survived by his wife of 47 years, JoAnn (Buskirk) Kordyak. He is also survived by his three children, Wendy Lou (Rob) Smith, Michael Wayne Kordyak and Julianne (Matt) Furlan, (from his first marriage to Adele (Kushner) Kordyak), his six grandchildren and two great-grandchildren. He also leaves many lifelong friends. Born and raised in San Bernardino, the son of George and Violet (Whitebrook) Kordyak, Dennis was a lifelong resident of this city. Having seen in his youth that the people of San Bernardino held the promise for a bright future, Dennis was dedicated to making his home the best it could be. Thus, he spent his life finding ways to continually give back to the people who created such a rich and fulfilling life for him. Dennis attended San Bernardino High School. At the age of 20 he took over Kordyak Service, the family automotive detailing business, with his older brother Donald. Together, they built Kordyak Service into a hallmark of the community. By leveraging an endless supply of skill and charisma, they attracted car aficionados/customers from across Southern California, setting a standard for quality and service in their field that will never be surpassed. Throughout his life, Dennis was an avid outdoorsman and car enthusiast. Between fishing trips to Lake Crowley and hunting at Goffs, Dennis spent his time building custom classic cars from scratch. In 1996, his love for cars led him to become one of the original sponsors of the rebirth of the Route 66 Rendezvous in San Bernardino, a tradition that still continues today. Dennis was also a member of the Over The Hill Car Club, and spent endless weekends traveling with his friends to car shows across Southern California where he won countless awards for his "Best of Class" custom cars. Most of all, Dennis loved spending time with his family and friends. He had a generous soul that was founded upon a belief in charity and service. Always quick with a joke and a smile, Dennis was loyal, devoted, and true. He made all who knew him feel lucky to be a part of his life. Words cannot express how much he will be missed, nor can they overstate the degree to which he will be remembered. In lieu of flowers please make donations in Dennis’s memory to American Heart Association, P.O. Box 742030, Los Angeles, CA 90074-2030. A Celebration of Life Ceremony at the Mitla Cafe Banquet Hall.

The family of Mr Dennis Michael Kordyak created this Life Tributes page to make it easy to share your memories.

Send flowers to the Kordyak family.