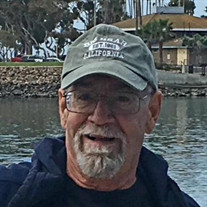 Dennis Lyle Branch, age 75, of San Bernardino, California passed away on November 21, 2021 following a brief illness. He was born November 16, 1946 in San Bernardino, California. He is survived by his daughter, Shawna LaMunyon and her husband Garret of Brea, California; his son Robert Branch and his wife Christine of Villa Park, California; grandchildren Shaya and Kaci Branch, Jonathan, Madeline and Elisabeth LaMunyon; sister Barbara Johnston and her husband, Alan of Gardnerville, NV; brother-in-law, Ronald Stanonik of San Diego; three nephews (Jeremiah and Scott Johnston and Kevin Stanonik) and two nieces (Kathryn Kreckel and Sara Johnston). He was preceded in death by his parents, Kathryn and Robert Branch and sister, Rebecca "Becky" Stanonik. He was a long-time San Bernardino resident but also resided in Huntington Beach, San Diego, Orange and Big Bear, California. He graduated from Pacific High School in 1964 and attended San Bernardino Valley College. He was employed by Adohr Farms and Bon Suisee. In 2014, he received a heart transplant and afterwards lived life to the fullest enjoying time with family, music, fishing, exercising and spending time in Big Bear with his dog. Graveside services will be held at 11 am on December 13, 2021 at Mt View Cemetery in San Bernardino. In lieu of flowers, donations may be made to the Cedar Sinai Hospital Heart Transplant program or a charity of choice.

The family of Dennis Lyle Branch created this Life Tributes page to make it easy to share your memories.

Send flowers to the Branch family.