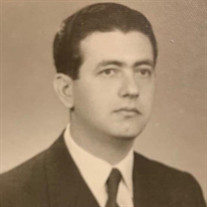 Dimitri Vassilakos was born to Anargyros and Stavroula Vassilakos in Gytheion, Greece, near the family's ancestral village of Petrina. He excelled as a student. He complained he had nothing else to do other than read books while watching the family's sheep and goat to keep them from eating the olive trees. Anargyros had emigrated to the United States with his brother, become a US citizen, and had operated a grocery store in Chicago. Anargyros had returned to Greece to find a wife. When war broke out with Turkey, Anargyros was drafted into the Greek military, which resulted in the loss of his US citizenship. Anargyros had planned to return to the US with his family, but he passed away in March of 1939, one year before the Italian and German invasion of Greece. As the oldest son of a family with no father, Dimitri took the role of providing for his mother and siblings by hunting birds and finding food for the family. German troops patrolled the village during the day, and resistance fighters patrolled at night. Both sides would shoot any civilian they suspected of collaborating with the other side. The family would scavenge the fields for anything to eat. One thing they couldn't eat was a rotten loaf of pumpernickel thrown to them from a passing German truck. After the Germans and Italians left Greece, the resistance fighters morphed into a communist insurgency, and a civil war started. Dimitri was drafted into the Greek military as a radio officer. He did not excel as a soldier. He was threatened with courts martial for refusing to serve on a firing squad. After the civil war, Dimitri went to Athens where he began work on a degree in economics. He did not complete the degree. After having an argument with a professor, he changed his plans and decided to apply for a scholarship from the Greek military to study in the US. He graduated from Stanford University with a bachelors and a masters in electrical engineering. His plan was to continue on to get a PhD, but while working during the summer for a Boeing subcontractor in Seattle, he asked a young librarian to help him find a book. Upon realizing he was Greek, she mentioned that a Greek movie was playing at a nearby theater. Dimitri and Marion White were married one month later. Dimitri and Marion bought a house in a Seattle suburb and had a daughter named Jill and a son named Greg. Not being a fan of Seattle weather, Dimitri took a job with TRW in San Bernardino in 1963 and moved his family there. One more son, Jim, was born a few years later. Dimitri worked for TRW for about 25 years, but he never lost his interest in economics and began a parallel career by investing in apartment buildings. Dimitri was devoted to his wife and family and placed a very strong emphasis on education for his children. When Marion's health began to decline, he arranged the best care possible for her including around the clock private nursing. He stated it was his goal that Marion should outlive him. Both Marion and Dimitri contracted COVID. She survived. He did not. Dimitri is survived by his wife, Marion, daughter, Jill Vassilakos-Long, son Greg and his wife Christine, son Jim and his wife Shuo Tai, grandson Paul Vassilakos-Long and his wife Ashlen, grandson Matthew Vassilakos-Long and his wife Barbara, granddaughter Sophia Vassilakos, brother Takis, and brother Fotis and his wife Mary. He was predeceased by his parents, his sisters Elli Vassilakou and Toula Anagnostopoulou, his sister-in-law Mika Vassilakou, his brother-in-law Theodoros Anagnostopoulos and his brother- and sister-in-law Sidney and Betty White. No memorial service is planned at this time.

Dimitri Vassilakos was born to Anargyros and Stavroula Vassilakos in Gytheion, Greece, near the family's ancestral village of Petrina. He excelled as a student. He complained he had nothing else to do other than read books while watching the... View Obituary & Service Information

The family of Demetrios Vassilakos created this Life Tributes page to make it easy to share your memories.

Send flowers to the Vassilakos family.