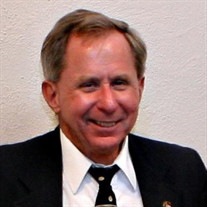 David Joseph Bennett, a 60 year resident of San Bernardino, passed away peacefully at his brother's home in the early hours of Friday April 10th, 2020. Dave was born January 13th, 1948 on Carswell Air Force Base in Fort Worth, TX to Rita Alma (Huber) Bennett and Major Thomas George Bennett who was commander of the base weather station. He moved often in his early years living both internationally and in the US. Upon his father's retirement from the USAF the family settled in San Bernardino where he graduated from Aquinas High School in 1966. After graduation he attended San Bernardino Valley College and worked at Kaiser Steel in Fontana. In June of 1968 Dave enlisted in the United States Navy and was accepted into the Naval Electronics School in Memphis TN, where he graduated as “Honor Man” first in his class of 300. He was then stationed at NAS North Island on Coronado as part of Naval Air Squadron VF-96 (the 'Fighting Falcons') in preparation for deployment in the Vietnam War. In October of 1971 he sailed aboard the USS Constellation for a six-month cruise to be deployed 10 miles off the coast of South Vietnam. The deployment was extended three additional months to provide air support for the mining of Haiphong Harbor as part of Operation Pocket Money. Dave was present on the Constellation on May 10, 1972 when Cunningham and Driscoll of VF-96 shot down 3 enemy MIGs to add to their previous 2 kills and become the only Naval Air Aces of the war. He repaired and maintained the RADAR systems on their F4J Phantom jets. After returning from Vietnam Dave spent time at NAS Miramar and NAS Pt Mugu. After being honorably discharged from the USN with the rank of Petty Officer 1st Class, Dave returned to Kaiser Steel where he worked for the next decade as well as starting his own business as a commercial photographer. After the plant closed, he decided to return to school at CSU San Bernardino where he earned a Bachelor's degree in English and teaching credential. Dave then embarked upon his second career in the San Bernardino Unified School District as a US History and Math teacher at San Bernardino High School. He retired from teaching in 2012. Dave had lifelong interests in electronics, photography, foreign cars and music and imparted much of his love for those pursuits to his siblings. He loved watching televised auto racing and tennis. He was extremely gregarious, made friends easily and was a deeply religious Roman Catholic with an unshakable faith. His favorite saying when anyone would depart was 'keep the faith!' He leaves behind two older sisters, Sandra Devine of Spring Grove, Illinois and Mary Gilley of Angeles Oaks and five younger brothers - Francis Bennett of San Bernardino with whom he lived the last years of his life while battling PSP - Parkinson's Disease, Michael Bennett of Beaumont, Thomas Bennett of Lake Arrowhead, Gerard Bennett of Crafton Hills and Richard Bennett of Lakewood, CO and their spouses and children. He was predeceased by his parents and youngest sister, Lisa. Dave showed lifelong care and generous assistance to his family, friends and former students and was beloved by all of them David will be laid to rest at Riverside National Cemetery where his parents and brother in law Bob are interred. A Requiem funeral Mass will be offered for the repose of his soul at a date to be announced after large gatherings are once again allowed.

David Joseph Bennett, a 60 year resident of San Bernardino, passed away peacefully at his brother's home in the early hours of Friday April 10th, 2020. Dave was born January 13th, 1948 on Carswell Air Force Base in Fort Worth, TX to Rita Alma... View Obituary & Service Information

The family of David Joseph Bennett created this Life Tributes page to make it easy to share your memories.

Send flowers to the Bennett family.