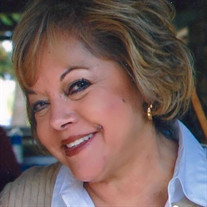 Connie was born on February 21, 1946 in San Francisco, California to Sebero (Shorty) and Jovita Marin. She passed away at home on January 12, 2016 in Rancho Cucamonga at the age of 69, no known reason for her passing at this time. Connie grew up in San Bernardino and graduated from San Bernardino High School in 1964. Connie married in Fresno CA, on September 4, 1965 to Arnold Vasquez, they had a loving relationship for the past 50 years. Connie was a little bundle of energy. She enjoyed staying active with her body pump and body combat gym classes. She also enjoyed going camping with her family, traveling with her husband, playing bunko with the ladies and watching movies. Her time at home was spent cleaning, relaxing, along with getting caught up in the Lifetime Network and mystery movies. Along with these programs were the Price is Right, Lets Make A Deal and the Oprah Winfrey Network. Two of her most common favorite pastimes were getting her nails done and nightly talks with her youngest son, Nathan. She was a drug and alcohol counselor before retiring in 2008. Her career started in 1982 at Aztlan in Ontario CA as a Substance Abuse Counselor. She worked at a number of jobs following, Casa De San Bernardino for 8 years, Molina Medical Center for 2 years, WCHS Inc HIS Methadone Clinic for 2 years. Her final position was at Valley Improvement Program, where she was the Program Administrator for the remaining 12 years before retiring in 2008. She is preceded in death by her loving father, Sebero (Shorty) Marin and Loving Aunt Lupe Rodriguez. Connie is survived by her husband Arnold, sons Arnold III, Isaiah and Nathan, daughters-in-law Raelena and Tria Vasquez along with grandsons Vikash, Gianni, Diego, Jaison Isaiah jr, Jeremiah, Noah, and granddaughter Angelica. Sisters Linda, Kathy, and Dolores with their husbands Richard Montano and Ted Ruybal, and her brother George and sister in-law Cecilia Marin along with her cousin Sister Helen Rodriguez. Services for Rosary and Mass will be as follows: Public Viewing: Wednesday, January 20, 2016 from 5-7pm with a Rosary beginning at 7pm at Bobbitt Memorial Chapel, 1299 E. Highland Ave., San Bernardino, Ca. Funeral Mass: January 21, 2016 at 11am at Sacred Heart Church located at 12704 Foothill Blvd., Rancho Cucamonga. Reception following Mass at 1pm at Joseph Fillippi Winery and Vineyards at 12467 Baseline Rd., Rancho Cucamonga.

Connie was born on February 21, 1946 in San Francisco, California to Sebero (Shorty) and Jovita Marin. She passed away at home on January 12, 2016 in Rancho Cucamonga at the age of 69, no known reason for her passing at this time. Connie grew... View Obituary & Service Information

The family of Mrs. Connie Vasquez (Marin) created this Life Tributes page to make it easy to share your memories.