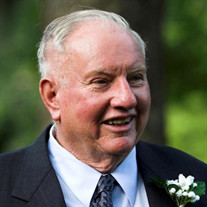 Charles Robert “Bobby” Littleton He was born in Ontario CA to John and Agnes Littleton on August 1, 1928 and passed away on October 30, 2020. He served in the U.S. Army, basic training was in Ft. Ord, CA. He spent 6 months in school studying “Integrated Fire Control” and Electronics on Anti-Aircraft Guns in Aberdeen Proving Ground in Maryland. He later was sent to Ft. Monmouth, N.J. for further training, but was in quarantine after contracting meningitis and never got to see outside the hospital. He was stationed in Anchorage Alaska for the remainder of his Active Duty. He married the love of his life, Mary Margaret Wright in 1965. She came with 3 young sons. They also raised their first granddaughter Heather years later. Mary Margaret preceded him in death after 45 years of marriage. He was a lifelong member of Rotary International, and never missed a meeting, often attending out of state while on vacation, which was to Martin’s Ferry, OH most every summer. His love of dogs dates back to his childhood when he had his first Scottish Terrier. He was the first of many Scotties. His hobbies included machine work, building hot rods, and never met a stranger. He was part of the Littleton Dairy in San Bernardino CA as it was family owned. After the dairy closed, the family built Littleton’s Mobile Home Park. He was preceded in death by eldest son Joe. He leaves behind sons Fred (Leslie) Wright and Lee (Carol) Wright; Grandchildren Heather (Eric) Hill, Cassidy (Ilona) Wright, Ben Wright, Crystal Wright, Jo Ann Bachmann, and Brad Wright; Great Grandchildren Westyn, Harlan, Sanai, Mila, Mackenzie, and Daniel. He is also survived by brother John (Darlene) Littleton, sister Frances Mann, and was preceded in death by his brother Jack Littleton. He is survived by may nieces and nephews as well. Due to Covid, there will be no services at this time. In lieu of flowers, we suggest donations be made to Rotary International or to your local no kill animal shelter, Bobby would love that.

The family of Charles Robert Littleton created this Life Tributes page to make it easy to share your memories.

Charles Robert “Bobby” Littleton
He was born in Ontario CA to...

Send flowers to the Littleton family.