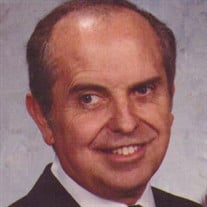 Charles Wallis Eastwood (94) passed away on January 3, 2020, in Redlands, California from causes related to age. Known for his honesty, concern for others and diligence to duty, he counted as friends people from all walks of life. His example will impact generations to come. Charles was born May 30,1925 in Salt Lake City to Charles and Constance Wallis Eastwood, immigrants to the US from England. He was educated in public schools. In 1943, shortly after graduation from West High School in Salt Lake City, he was drafted into the US Army and served for two years in the Pacific Theater during World War II. Afterwards, he served a mission for the Church of Jesus Christ of Latter-day Saints in Mexico, where he met fellow missionary Laurie Teichert. After their missions, they married in the Salt Lake Temple of the Church on December 3, 1948. Charles then studied at the University of Utah, where he received a BA in History in 1952, by which time he and Laurie had three daughters. He then taught school briefly in Utah before moving to San Bernardino, California, where he taught in secondary schools in the San Bernardino City School District for thirty-seven years, retiring in 1990. Spanish became the subject he taught almost exclusively. He received an MA in Spanish Literature in 1967 from the University of Arizona. Charles and Laurie raised five daughters and one son. They instilled in their children a love for music, people and languages of different cultures, and the gospel of Jesus Christ. They served in many positions for the Church of Jesus Christ of Latter-day Saints. Charles particularly loved the years he spent as a bishop, a patriarch and a mission president in Mendoza Argentina, where he served with Laurie at his side. The family would like to thank the caregivers at Mission Commons in Redlands, California, who helped Charles as his health declined. He is survived by his daughters, Marian Wardle (Lynn); Jeanette Ensley; Elisa Pulido; Nadine Eastwood; his son, Charles John (Kumiko); his sister, Connie Coates; 18 grandchildren and 42 great grandchildren. He was predeceased by his wife, Laurie, his brother Joseph Eastwood, his sisters Mary Budd and June Cozzens, his daughter Eve Fey, and grandson Jared Ensley. Funeral services will be held Friday, January 10, in San Bernardino at the Church of Jesus Christ of Latter-day Saints, 3860 N. Waterman Ave, at 10:00 a.m. A viewing at the church will precede the funeral from 9:00 to 9:45. A visitation will be held on Monday, January 13, at 10:00 a.m. at the Larkin Mortuary, 260 East South Temple in Salt Lake City. Interment will follow at the Salt Lake City Cemetery.

Charles Wallis Eastwood (94) passed away on January 3, 2020, in Redlands, California from causes related to age. Known for his honesty, concern for others and diligence to duty, he counted as friends people from all walks of life. His example... View Obituary & Service Information

The family of Charles Wallis Eastwood created this Life Tributes page to make it easy to share your memories.

Send flowers to the Eastwood family.