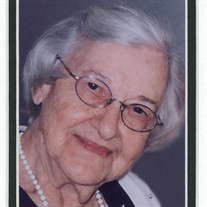 Caroline was born November 6, 1916 in White Lake South Dakota; the Lord “called her by name” on December 31, 2017. After high school she studied at the Garfield Memorial Hospital in Washington D.C. where she graduated as a Registered Nurse in 1938. She went to work at the Kingsbridge Veterans' Hospital in New York where one of her nurse friends set her up on a blind date with her brother. She married that blind date, John W. Roddy, in August of 1942. They lived in the Bronx where their first two children were born, then moved to San Bernardino, California where they had three more children and lived the rest of their lives. Caroline has been a devout Lutheran her entire life, and it was that strong faith that sustained her when her husband John died at age 48. She went back to work as an R.N. at San Bernardino County Hospital until she retired in 1976. In 2002 she moved to Leisure Pointe, an independent living facility in San Bernardino. Caroline loved good food, Bible Class, Jeopardy, baseball, and any sports her grandchildren participated in. All she ever wanted in life was Good Kids, and she believed in each of us and our unlimited potential. She was frugal, hard-working, happy-with-what-she-had, and loving—so humble, unassuming, and appreciative of even the smallest of favors. She was preceded in death by her husband John, son James, and daughter Susan; she is survived by daughter Barbara, sons John and Robert, grandchildren Daniel, Kristin, Rachel, Bradley, Jessica, Paige, and MacKenzie, and great grandchildren Nicholas, Matthew, Laura, Jennifer, Harper, and Dean. For us this is the end of an era, and for Caroline, the beginning of another “HAPPY DAY!”. Private Services will be held at Mt. View Cemetery in San Bernardino.

Caroline was born November 6, 1916 in White Lake South Dakota; the Lord &#8220;called her by name&#8221; on December 31, 2017. After high school she studied at the Garfield Memorial Hospital in Washington D.C. where she graduated as a Registered... View Obituary & Service Information

The family of Caroline Louise (Endter) Roddy created this Life Tributes page to make it easy to share your memories.

Send flowers to the Roddy family.