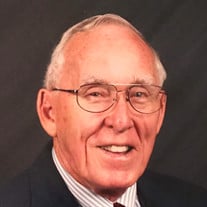 Carl Thomas Wiles (February 21, 1938 - November 16, 2018) Carl Thomas Wiles was born on February 21, 1938, the second youngest of Ivan and Edith Wiles’ seven children. After a childhood spent roaming the countryside of Bone Gap, Illinois with his best friend Sammy Beadle (and Sammy’s pet goat), he left for college at Memphis State University. Carl graduated with a BA in Geography in 1960 and joined the Air Force as an intelligence officer. While stationed in St. Louis, he met Amy Ewing on a blind date. They were married in Mt. Carmel, Illinois on September 8, 1963 and left for his post in Japan three weeks later. After serving three years in Japan, they returned to the U.S., and Carl attended Syracuse University, graduating with an MA in Geography in 1968. He served in Vietnam in 1968-69 and was then stationed at Langley Air Force Base in Hampton, Virginia. Carl and Amy raised two daughters, Alison and Stacey, while living in Hampton, except for a 4-year post in Stuttgart, Germany where Carl enjoyed traveling extensively with his family. After 22 years of service, Carl retired from the Air Force in 1982 with the rank of Lt. Colonel. He then began a second career as a business manager at Old Dominion University in Norfolk, Virginia, retiring from that position in 2003. Carl and Amy moved to Highland, California in 2007 to be near their granddaughter, Clare Carlson. In all the places he lived, Carl volunteered his time for his church and his daughters’ activities. He is survived by his wife, his two daughters, his granddaughter, and two of his siblings, Sandra Thomason and Mary Smith. Carl loved family time, gardening, and traveling. But more than that, Carl was a rare person. He carried love and joy and enthusiasm with him always. He gave of himself - his attention, his time, whatever he had - to everyone around him. He always seemed to know someone, everywhere he went (which became a source of amusement for his family). He was outgoing, friendly, and always genuinely interested in other people. His light will be sorely missed. That spark, however, can be carried by the family and friends he leaves behind. Carl shared his principles by living them: enjoy a good meal with great company (one of his favorite activities), welcome the strangers (Carl never met one), smile often, give flowers for no special reason (roses with baby’s breath is a good option). Fly a kite. Take pictures (according to Carl, volume is the key - if you have lots, surely one or two will be good). Pat a dog. Be kind to a child. There will be a memorial service followed by a celebration of life at Bobbitt Memorial Chapel in San Bernardino, California on January 2, 2019 at 10:00 am. Interment with military honors will follow at Riverside National Cemetery at 1:45 pm. In lieu of flowers, donations to one of the following organizations would be a blessing to others: the Alzheimer’s Association, International Medical Corps, Doctors Without Borders, or your local food pantry. To leave a condolence on Carl’s Memorial Page, please visit www.bobbittchapel.com

The family of Carl Thomas Wiles created this Life Tributes page to make it easy to share your memories.

Send flowers to the Wiles family.