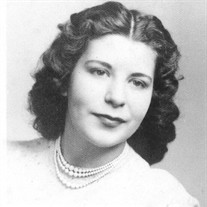 On December 10, 2018, our beloved mother Betty Jane Midkiff, left us to join our father in heaven. Betty was born January, 26, 1935, in Huntington, West Virginia to parents Theodore and Goldie Ray. There her indomitable spirit was forged. After having contracted Scarlet Fever and Osteomyelitis at the tender age of eleven, Betty had to learn to walk again. This was a testimonial to her invincible character a trait she would exhibit throughout the rest of her life. Betty met and married a hometown boy, newly enlisted Leslie Leon Midkiff on December 22, 1956. They had two daughters Cheryl Lynn and Darla Rene. Being married to a military man afforded Betty the opportunity to travel throughout the United States and Europe. Betty completed her High School requirements and graduated while living in Anchorage, Alaska. She worked as a Red Cross Volunteer at the hospital on Ramstein Air Force Base in Germany, and continued her education at Lancaster Community College in Lancaster, Ca. It was in Lancaster, with her nest finally empty, she began to nurture her creative side. She started with cake decorating. There wasn’t a member in the family that didn’t receive an elaborately decorated cake, from adorable drunken elephants sliding down the side of a birthday cake to Football shaped cakes for her son-in law’s favorite team, the Raiders. Betty became quite proficient at cake decorating and began to sell her tasty works of art. However, it did not end there, no indeed. Mom, began to take oil painting and Acrylic classes, in which she excelled. Her paintings won awards from Honorable mentions to First Place at surrounding Art Festivals and Fairs, where she also sold her work. She grew into the artist that she would be until the end of her days. However, being an artist was not enough, Mom wanted to get involved in the community and began working with Lancaster’s Allied Arts Association, in the capacity of Festival Chair Committee, Building Committee and Event Planner. Her dedication to the art community landed her the title of President of the Allied Arts Association, a position she held from January 1994 – September 1998. During Betty’s terms she received five honorable awards for service recognition in ceremonies held by Lancaster’s City Counsel, receiving these awards from the presiding Mayor. On March 14, 1996, our father passed away and in 1999, Betty relocated to Highland Ca. to be closer to her daughters and son in law. Here she discovered a new creative outlet, she began studying acting with local thespian and T.V. personality, Ed Ford. She became active in acting and singing. Performing with Highland’s finest senior actors and singers forming an acting troupe that held performances at the Sturges Theater and Fontana’s Mummers Theater. Mom continued to perform in shows, until she was physically unable. Betty also became a member of the Red Hat Societies group “The Radiant Rubies of Highland,” she adored getting dressed up in the traditional red and purple regalia and enjoyed the comradery of the Red Hatters and was an active member who participated in all their functions designing their flyers and writing their monthly newsletters. Betty’s last few years were spent at Grand Terrance Health Care Facility, From December 24, 2015 to December 9, 2018. Despite being confined to a wheelchair, her spirit was not dampened she remained active taking on the responsibilities of Resident Counsel President twice during her stay. Betty also played an active role in planning parties for the residents. And was fondly known as the “Queen of Scrabble”. Her love for painting never diminished, she painted pictures right up to the day she left us. Betty Jane Midkiff will be greatly missed and lovingly remembered by a variety of names, for she was so special in the hearts of those who knew and loved her. To some she was “Countess Betty” to others she was simply known as “The Queen,” to us she was Mom, and she will serve as an inspiration to us forever and will lovingly remain in our hearts until we meet again. Mom is preceded in the passing of her father, Theodore Ray, mother, Goldie Martin Ray, stepmother, Alta Virginia Bowen Ray, brothers, James Ray, John Ray and Freddy Ray. Survived by Daughters, Cheryl Lynn Midkiff and Darla Clauson, husband Tom Clauson. Brother Ted Ray, wife Linda Ray and sons Ted Jr. and Terry Ray. Sister Loyce Johnson, husband Bob Johnson. Granddaughter Michele Michaelsen, husband Matt Michaelsen and Great grandchildren, twin boy’s Wyatt and Quinn Michaelsen whom she loved dearly. Services will be held at Bobbitt Memorial Chapel, 1299 E. Highland Ave. January 4, 2019 at 10am. All are welcome to attend. An Internment service will be held at Riverside National Cemetery, 22495 Van Buren Blvd. Riverside, Ca. 92518 at 1pm.

On December 10, 2018, our beloved mother Betty Jane Midkiff, left us to join our father in heaven. Betty was born January, 26, 1935, in Huntington, West Virginia to parents Theodore and Goldie Ray. There her indomitable spirit was forged. After... View Obituary & Service Information

The family of Betty Jane Midkiff created this Life Tributes page to make it easy to share your memories.

Send flowers to the Midkiff family.