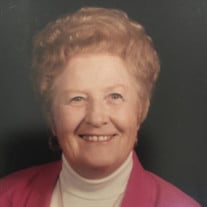 Berniece Elizabeth (Flitter) Rhoda, 100, of San Bernardino passed away on Tuesday June 30, 2020 at her residence in San Bernardino, California. Berniece was born at home on her parent’s farm on November 11, 1919, in Wanatah, Indiana, the daughter of Leo and Dora (Mohlke) Flitter. Berniece was a loving sister, wife, mother, grandmother, great-grandmother, aunt and friend. She is survived by her sister Doris (Flitter) Friday of Chesterton, Indiana, son Richard and wife Shirley of Hacienda Heights, California, grandson Bryan Vandegrift and great-grandson Dominic of Menifee, California and great-granddaughter Addison of Rancho Cucamonga, California, grandson Jeffrey Vandegrift and wife Lisa and great-granddaughters Kelsey and Breanna of Apple Valley, California, and grandson Paul Rhoda and fiancé Summer and great-grandchildren Aubree and Andreus of Whittier, California. Berniece is preceded in death by her husband Guy Rhoda, her daughter Diane (Rhoda)(Vandegrift) Isaacs and daughter-in-law Susan (Hoover) Rhoda. Berniece lived a full and active life and enjoyed spending time with family and friends. She graduated with honors from Chesterton High School in 1937. After high school she was a live-in housekeeper for a family of nine and eventually got a job as a seamstress. Berniece was married to Guy Rhoda on September 30, 1939 for 52 years and had a son Richard and daughter Diane. In 1954, Berniece and her family moved to San Bernardino, California. Berniece immediately found a job as a specialty seamstress and went to night school at Valley College and UC Riverside. She then found employment at the Credit Office with JC Penney. In 1957, Berniece was hired by the State of California EDD. In 1980 Berniece received the Sustained Accomplishment Award, which was quite an honor. During her last 12 years of employment, she was a supervisor. In 1981 Berniece retired from EDD, then she and her husband traveled extensively for many years. Her husband Guy died in 1992. Berniece stayed active and became a member of the auxiliary “Pink Ladies” at St Bernardine’s Hospital, where she volunteered at the front desk and ICU. Berniece was also a member of The Red Hat Society. She also loved to go line dancing every week at the Senior Citizens Centers and go to the movies and plays with her friends. Visitations will be held at Bobbitt Memorial Chapel 1299 E Highland Ave, San Bernardino, on Thursday July 16 and Friday July 17, 2020, both days between 4:00 and 7:00 PM. A private funeral service will be held graveside at 10:00 A.M. on Saturday July 18, 2020 at Mt View Cemetery of San Bernardino, California. Funeral arrangements are being handled by Bobbitt Memorial Chapel in San Bernardino, California. The family of Berniece Rhoda wishes to thank Bobbitt Memorial Chapel and Mt View Cemetery.

Berniece Elizabeth (Flitter) Rhoda, 100, of San Bernardino passed away on Tuesday June 30, 2020 at her residence in San Bernardino, California. Berniece was born at home on her parent&#8217;s farm on November 11, 1919, in Wanatah, Indiana, the... View Obituary & Service Information

The family of Berniece Elizabeth Rhoda created this Life Tributes page to make it easy to share your memories.

Send flowers to the Rhoda family.