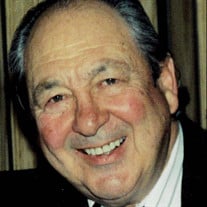 Benjamin Romano, a Redlands resident for 51 years, passed away on August 18, 2018. Born at home in Oakland California on January 23, 1932. When the Korean war broke out he joined the US Air Force for 4 years, serving at McClellan AFB, the Lajes Field and Azore Islands. In 1956 Ben was honorably discharged and returned to San Jose where he attended State College. He then met his wife of 59 years Betty Anderson. In 1959 he received a BS in Management from San Jose State University and settled in San Diego where he began life working as a real estate agent. He enrolled in San Diego State and in 1967 earned a Secondary Teaching Credential, later a Masters in Manpower Management. In 1967 he began his teaching career with Redlands Unified School District where he retired in 1993. While at RUSD he taught at RHS, Orangewood, and after school driver training as well as adult education. He was a member of several community and fraternal organizations including Scottish Rite, Sojourners, York Rite, Shrine International, Hi Twelve, and San Bernardino Elks. He was a life member of Redlands American Legion, along with a member of the Native Sons of the Golden West for almost 50 years. Although retired, Ben continued to lead an active life with his wife Betty, son Nick, daughter-in-law Maria Guiliano, two grandsons Rocket, Paul Romano and his wife Lauren. When time permitted, Ben enjoyed his hobby as an amateur photographer, taking pictures and collecting photographic equipment. He might not have remembered how many rolls of film he processed, but enjoyed taking and sharing pictures of family and friends. In lieu of flowers please send donations in memory of Benjamin Romano to Shriners for Children Medical Center, 909 South Fair Oaks Avenue, Pasadena, CA 91105. Graveside services will be held at Mt. View Cemetery in San Bernardino on Tuesday August 28, 2018 at 10am. Immediately followed by services at the Yucaipa Masonic Lodge.

Benjamin Romano, a Redlands resident for 51 years, passed away on August 18, 2018. Born at home in Oakland California on January 23, 1932. When the Korean war broke out he joined the US Air Force for 4 years, serving at McClellan AFB, the... View Obituary & Service Information

The family of Benjamin M. Romano created this Life Tributes page to make it easy to share your memories.

Benjamin Romano, a Redlands resident for 51 years, passed away...

Send flowers to the Romano family.