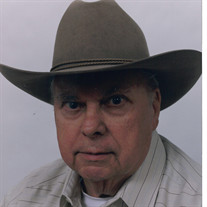 Arthur Edward (Ted) Knuckey Jr., 88, of San Bernardino, California passed away peacefully on Thursday, February 28, 2019. Ted was born in Longmont, Colorado in 1930 to parents Arthur Sr. and Mary. He spent his early years in Buena Vista, Colorado, developing a love of hunting, fishing and all things outdoors, which remained with him all his life. As a teen, Ted worked as a ranch hand and became a rodeo cowboy. Enlisting in the Navy at 17, he trained as a Hospital Corpsman and deployed to the Mediterranean in 1951 with the 2nd Battalion, 6th Marines. Following his military service, Ted returned to the equestrian life, working at various ranches in Southern California. During this time he met the love of his life, the former Marylin Greusel of San Bernardino, California, and they were married for 59 years. Ted joined the San Bernardino Police Department in 1954, retiring 22 years later as a lieutenant. Staying in the legal realm, he completed his Juris Doctorate, became an attorney, and opened his own law practice. In 1988 he was appointed to the bench as a San Bernardino Superior Court Commissioner, retiring in 1999. In his leisure, Ted always returned to his outdoor hobbies, including annual family deep-sea fishing adventures out of San Diego. He took up writing and authored books based on the tales from his youth and his many varied experiences. He loved to cook and spend time with family and his beloved shepherd mix, Buddy. Ted is survived by his three daughters, Patricia (Craig) Clough, Teresa (Richard) Endsley and Melisa (Bryan) Harnitchek, 10 grandchildren, Sarah (Mitch) Canciller, Kevin (Lauren) Clough, Eric (Chandni) Clough, Caitlin Clough, Kelli Endsley, Kent (Haylee) Endsley, Lauren(Matt) Dellinger, Kathryn(Patrick) Roche, Cara Harnitchek and Liana Harnitchek. Ted has 7 great grandchildren. He is also survived by his sister Sandee Knuckey. Services for Ted will be Thursday, March 7, 2019 at 11:00 a.m. at Bobbitt Memorial Chapel. A military honors ceremony will take place at Mt. View Cemetery at 1:30 p.m. In lieu of flowers, donations may be made to the San Bernardino Humane Society.

The family of Arthur Edward Knuckey Jr created this Life Tributes page to make it easy to share your memories.

Send flowers to the Knuckey family.