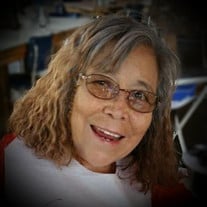 Angelica “Angie” Marquiss, 70, of Yucaipa, CA passed away Sunday, September 20, 2015. Angelica was born on February 15, 1945 in Bernalillo, New Mexico to Tranquilino and Agneda Baca. She moved to San Bernardino with her family when she was 7 years old, and remained in Southern California for the rest of her life. Angie had a great heart for children. Not only her own kids and their friends, but all those with which she came in contact. She spent 35 dedicated years as a secretary in the San Bernardino City Unified School District, where she was admired and respected by students, staff, colleagues, and parents alike. After retirement, Angie was a member of both the Eagles (Aeire #506) and the American Legion (Post #421). Prior to recent health issues, Angie was very active in both groups and enjoyed the camaraderie they provided. She held offices at both state and local levels and could be counted on to provide constant support and great organizational skills. She was also an avid reader and could always be found with at least one book in her hand. But above all else, Angie was a mother and grandmother. Her favorite pastimes were spent in the company of her family... dinners, outings, Disneyland trips, it didn't matter what the activity was as long as it was time spent with her family. She is survived by her domestic partner, Alfred Charlton, daughters Angela Marquiss and Karen Hessell, sons Michael Ames, Patrick Ames, Scott Ames, and Kenneth Marquiss, brothers Henry Baca, Orland Baca, and Tranquilino Baca, sisters Isabel Kline and Marie Smith, 13 grandchildren and 3 great grandchildren. Angelica was preceded in death by her husband Charles Marquiss, father Tranquilino Baca, mother Agneda Baca, siblings Bennie Baca, Pete Baca, Raymond Baca, Ida Tapia, Mary Delgado, and Sister Agneda of the Sisters of Loredo. A viewing and rosary will be held at Bobbitt Memorial Chapel on Monday September 28, 2015 from 5:00 – 7:00 p.m. Funeral services will take place at Bobbitt Memorial Chapel on Tuesday September 29, 2015 at 11:00 a.m. Interment to follow at Riverside National Cemetery, staging area #8, at 1:30 p.m. In lieu of flowers, the family requests that donations be made to the Alzheimer's Association.

Angelica &#8220;Angie&#8221; Marquiss, 70, of Yucaipa, CA passed away Sunday, September 20, 2015. Angelica was born on February 15, 1945 in Bernalillo, New Mexico to Tranquilino and Agneda Baca. She moved to San Bernardino with her family when... View Obituary & Service Information

The family of Angelica Antonia Marquiss created this Life Tributes page to make it easy to share your memories.

Send flowers to the Marquiss family.