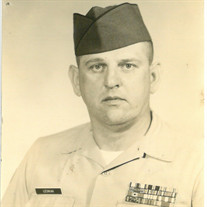 Ambrose A. Lesniak ‘Les’, 89, passed away peacefully, surrounded by family, on January 23, 2016, at his home in San Bernardino. Born in Summit Hill, PA to Albert and Angela Lesniak, Les was baptized into the Roman Catholic Church on October 17, 1926. He graduated from St. Stanislaus School in 1942 and worked as a Postal Carrier in Summit Hill from 1944 until he was drafted into the US Navy during WWII. He served on the USS Augusta, achieving the rank of Seaman First Class. After being honorably discharged, he volunteered to join the US Army and served during the Korean War from 1947-50. He was deployed to the Marshall Islands, where he witnessed the three nuclear tests. He then went on to volunteer a third time with the US Air Force where he spent the remainder of his military career and served once again during war time in Vietnam. He spent time in Cameron Bay with his unit the Triple Nickle Red Horse Squadron, who built the military base. He retired from the Air Force in 1977. Les married his childhood friend Lois Fay Hontz in 1957 and they went on to have five children. Upon his military retirement, he continued to work at Norton AF Base as a supervisor as a Civil Engineer; he also obtained a BS in Engineering from Southern Illinois University in 1987. Les had a passion for golf, even obtaining a hole in one! He was a member of the Knights of Columbus, Council 4488 Del Rosa (4th degree) and served as the Treasurer. He was a proud family man who enjoyed his children’s accomplishments and doted on his grandchildren and great-grandchildren. He was preceded in death by his wife Lois who passed in 1998. He is survived by his children Les (Carol) Lesniak of Texas, Michelle Lesniak of San Bernardino, CA, Robert (Julie) Lesniak of Kentucky, Jean (Bob) Findley of Missouri, and Joe ‘Moose’ Lesniak of Arizona. Also surviving him are his grandchildren, Brandi Siebert, Eric (Whitney) Findley, Brian Findley, Chelsea Tardif and his great-grandchildren, Maddie Puc Siebert, Rory Siebert, Ian Findley and Caleb Tardif.

Ambrose A. Lesniak &#8216;Les&#8217;, 89, passed away peacefully, surrounded by family, on January 23, 2016, at his home in San Bernardino. Born in Summit Hill, PA to Albert and Angela Lesniak, Les was baptized into the Roman Catholic Church... View Obituary & Service Information

The family of Ambrose A. Lesniak created this Life Tributes page to make it easy to share your memories.

Send flowers to the Lesniak family.